St. Patrick’s Day has become somewhat of a national celebration. How many of those celebrating so whole-heartedly are actually Irish? No matter, it’s an opportunity to have some fun and celebrate being green.

Personally, I don’t like the thought of food colouring in my beer, or anything other than the occasional shot of clamato juice, for that matter. So to celebrate in green style, try these spinach and ricotta ravioli instead.

I tried making ravioli dough a while back. It went OK, but I couldn’t get it thin enough with just a rolling pin. The dough was tasty enough, but a pasta machine is really necessary to get it thin, so the ravioli was too doughy.

With a bit of research, I found the perfect solution – wonton wrappers. Sure, the dough is not be as yummy as homemade pasta dough, but they are still tasty and easy to work with. I keep portions of wrappers in the freezer now, because there are a lot of tasty appetizers you can make, and of course ravioli.

I started with this recipe for the filling. However, since I like to experiment with different flavours, I modified it slightly. Where this recipe called for shallots, I used finely chopped onions, and while they were frying, I also threw in a couple of finely chopped canned artichoke hearts. I am on an artichoke kick lately.

The filling also includes ricotta cheese, parmesan cheese and an egg. I mixed it all together and then got to work on the ravioli. I set half the wonton wrappers out on a lightly floured surface.  This half served as the bottom, where the filling would be placed. I had a little bowl with water in it, and put a bit of  water onto each wrapper, just to get it wet as that helps it stick. I scooped filling onto each wrapper, and then wet the edges and placed a second wrapper on top, pinching the edges together. The key to these is similar to perogies – don’t put too much filling in, and make sure there’s no filling on the edges before you pinch them shut. 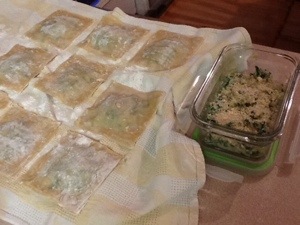 Once I had all the ravioli ready, I put them 5 at a time in a pot of lightly boiling water. They do not need much time in there, and I only put 5 at a time because I didn’t want them sticking together. They need just a couple of minutes in the pot, and once they float, I carefully take them out with a slotted spoon. Don’t leave them too long, and don’t have the water boiling too hard, or they will break open. I then fried them lightly with a butter and olive oil combo, and some pesto. You can put whatever sauce you like on it. 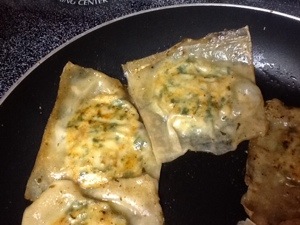 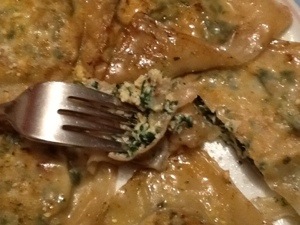 I even had extra filling, which I put in a small casserole dish and baked, and several days later put into a pepper and had stuffed peppers for supper.

I am a freelance writer and love to share my passion for writing with you. With theardizan.com I can explore some of my topics of interest, including the connection of goodness, fitness, and wellness. Visit my LinkedIn profile, follow me on Instagram and Twitter - @theardizan, and LIKE my Ardizan Facebook page.